Have you ever considered what life was like for housewives in the 1930s? Life during the Great Depression was not easy. How did the 1930s housewife care for her family in the midst of great hardship? Coming on the heels of the “Roaring 20s,” life in the 1930s was vastly different than the previous decade. The 1920s created a large cultural shift in the way that women dressed, the development of new technology, as well as the ways in which families persued leisure. It was a time of prosperity.

With the stock market crash in 1929, life changed drastically and the 1930s ushered in an era of significant hardship.

Jobs were hard to come by and families struggled to feed themselves. Furthermore, the Dust Bowl that took place during the 1930s created additional strain on the economy and greatly affected the well being of the country.

The reality is that the 1930s housewife now was tasked with the duty of holding together her family in the midst of relentless challenges. 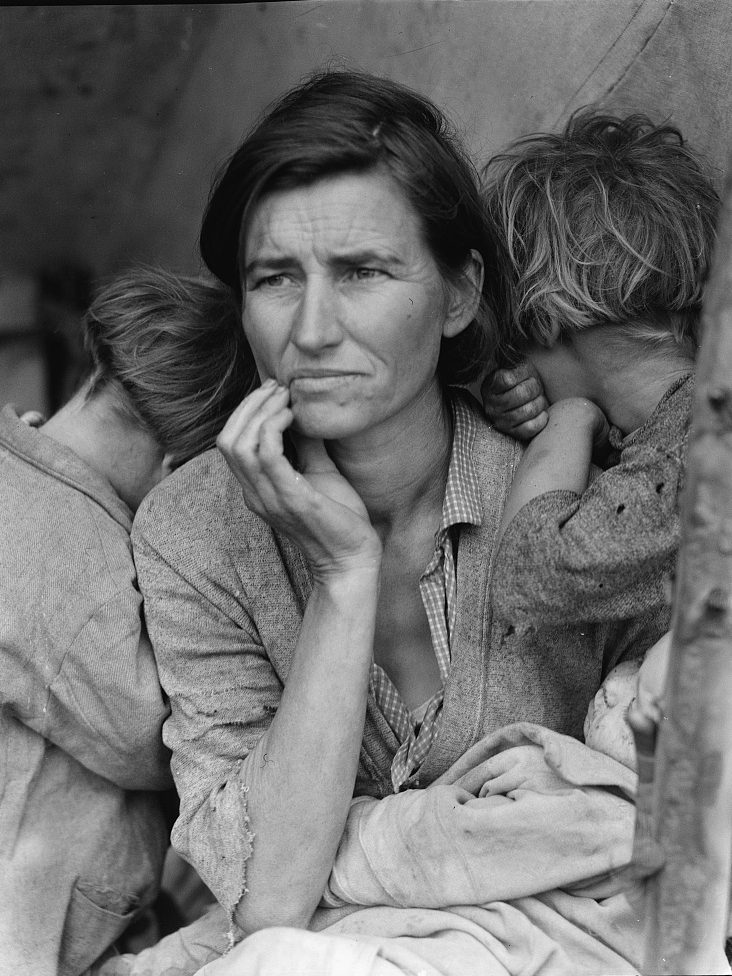 An iconic picture from the 1930s. Photographed by Dorothea Lange, it captures the destitute hardship of the decade.

After the stock market crashed, unemployment for men rose to 25 percent. The high unemployment rate led to more women seeking employment outside of the home as a means of survival for her family.

Back in the 1920s it became more common for women to pursue jobs outside of the home. Even with this shift of more women in the workforce, in the 1920s, they were for the most part, unmarried.

But that changed significantly in the 1930s, as there was a 50 percent increase in married women joining the workforce. In the 1930s, of the female workforce, one third of the women were married.

The increase of women in the workplace created some political tension. There was concern that women were taking jobs away from men. In fact, 26 states actually had laws against married women working.

However, working women in the 1930s were taking on jobs, that at the time, were socially acceptable for women. Some examples of jobs that they took include: nurses, school teachers, beauticians, maids, cooks, secretaries, and manufacturing jobs- such as sewing. Even with the shift of more women working outside of the home, men were still the primary breadwinners for their families. Therefore, as jobs and income became harder to come by, the 1930s housewife was tasked with the duty of feeding and caring for her family on an increasingly small budget.

There were a lot of ways that the 1930s houswife led her family through these challenging years. Frugality was one of the more important tools in her arsenal.

When it came to belongings, families lived by the mantra “Repair, reuse, make do, don’t throw away.” The 1930s housewife made the most of what she had.

There are numerous ways that families put this into practice. First of all, they used every last drop of absolutely everything. Whether it was, food, cleaning supplies, or clothing, they made sure they got all of the life possible out of things. Leaning into a frugal life meant that people learned new skills. Rather than buying things, they made things such as clothing, cleaning supplies, and linens.

Families learned how to repair their cars and households. Housewives gave their families hair cuts and learned how to garden. Eating out was a rare event.

Men often times took on odd jobs to help make ends meet. And people sometimes sold household items, or used them to barter for things that they needed.

While the 1920s pushed the envelope in the way of fashion, the 1930s saw a return to a more traditional style of clothing.

The square, loose drop waist, and shorter dresses of the 1920s were replaced with a more tailored, feminine, modest, and form fitting style.

One fashion goal of the 1930s was to create the illusion of a smaller waist and hips. This was accomplished by creating a wide shoulder look with the use of puff sleeves, shoulder pads, and large collars.

Another change in 1930s housewife fashion was that factory made clothing became more common, partly due to advancement in technology, and also because mass produced clothing cost less to produce.

An interesting note is that in this decade, buttons started to be replaced by zippers.

As a continuation from the 1920s, housedresses remained a popular item of clothing. Housedresses were created to give women freedom of movement as they went about their household duties. They were made of durable cotton and usually had bold and bright prints.

Housedresses were not meant to be worn outside of the home. Instead, women would wear an “afternoon dress” or “day dress” to run errands.

During the 1930s, it was not uncommon for housedresses to be made out of flour sacks. This was one way for the frugal 1930s housewife to make the most of what she had. A housewife showing off her dresses made out of flour sacks.

Hooverettes also came into being in the 1930s. These were reversible dresses meant for daily use. They were perfect for the frugally minded 1930s housewife because she could get multiple outfits out of the same dress.

Perhaps one of the biggest shifts in womens clothing in the 1930s is that it started to become socially acceptable for women to wear pants in certain situations. In the 1930s, there remained a sharp divide between city life and rural life.

As in previous decades, there was a stark contrast between the standard of living in rural areas versus the city. Even in the 1930s, most rural areas still did not have electricity and indoor plumbing.

Rural families were very much affected by natural disasters in the 1930s. Dust, insects, heat, and cold were all elements of rural life during the Dust Bowl. Perhaps the most painful realization of all is that the Dust Bowl could have been prevented. It was actually a manmade disaster.

In the 1920s, much of the the vast native grassland of the central prairies was overzealously plowed up in order to plant crops.

The immense amount of plowing and turning up of the topsoil, combined with drought conditions, are what created the Dust Bowl. The dirt that blew in great torrents across the nation throughout the 1930s was the topsoil of the native grasslands that were so eagerly plowed up for crop land. Piles of dirt created from dust storms on a farm near Liberal, Kansas.

Rural families struggled immensly through this time. The dust storms literally choked people to death. Families and livestock starved to death. It was a terrible tragedy.

There was little to no money. Neighbors helped each other as best they could through the hard times.

Many families were forced to move away. Their crops were destroyed by the dust storms, heat, and grasshoppers.

A great exodus occured during this time. With no way to make a living on the land, many families made their way to California as refugees of the Dust Bowl. They expected to find a better life there. But the reality is, they continued to struggle with poverty and hard times there too. The caption on the photo reads “More Oklahomans reach Calif. via the cotton fields of Ariz.”

So many people went to California that jobs were hard to come by. And the jobs that they did take on were difficult and labor intensive. For the families that remained behind, life was difficult. They survived the best they could by raising their own eggs, chicken, milk, beef, and vegetables. Families sold whatever excess they had. For some famlies, money from selling eggs helped them to survive.

Women carried on many tasks. They sewed and mended clothes, baked bread, and canned food. They made dresses out of flour sacks and feed sacks. In fact, feed companies would change the pattern on their sacks in order to give women more variety for their dress making (and to incentivize the women to buy their brand). Other chores they took on with their children included tending the garden, gathering eggs, cleaning the chicken coop, hauling water, filling the wood box, milking the cow, and feeding the livestock.

In 1935, the Works Progress Administration (WPA) was created by the government to create more jobs for those who needed employment.

Many men took on jobs through the WPA, doing things such as building roads and bridges, libraries, schools, swimming pools, playgrounds, and countless other improvments throughout the country. They even worked on bringing electricity to rural areas. A WPA project in Illinois

Though times were challenging, families still made time for fun activities. Rural families often got together for school programs, church dinners, and dances.

Familes spent time together playing board games, listening to the radio, and going to movies in town.

Things started to look up around 1940. The drought softened as normal rainfall amounts returned. Federal programs were put in place to help restore the Dust Bowl region to grassland, which in turn reduced the dust storms.

Life started to look up a bit, giving the country a breath of fresh air before it would encounter more hardship in the decade to come.

Other Articles in this Series: